Do not copy this Letter it is copyrighted

Thank you for your letter, I'm glad you enjoyed our books

I must say however that I'm always fascinated by the amount of misinformation that is placed on the computer and even more so when it becomes exaggerated. WE actually had exactly one tri-color puppy born in all the years we bred Yorkies.  After my sister died I gave up breeding extensively as it was what we did together. (in1985) Since Jans death I have bred exactly 4 litters and I stopped breeding completely probably 9 or 10 years ago. I could go look it up but I know Katie and Nicky were the last 2 puppies born.

I have shown several dogs that I purchased from others since then.

Our one tri-color puppy was born Dec. 10, 1976 and was a single puppy.  His sire was Wildweir Counterspy and his dam was Wildweir Stitch in Time.

His Reg. name Wildweir Triplicate. He was reg with AKC #: TB426843. This was a first litter for either of his parents. We had the bitch spayed and the male neutered and both were placed as pets. I had heard of Yorkies being born in England that were Tri's but "Trippy" was the only one we'd ever seen.

We kept him until he matured. He was born (as are fox terriers) as a white dog with black spots and developed his tan marking as he grew up. His black spots turned to blue-gray and his tan markings came out by the time he was around six months. His temperament was all yorkie and size was very typical around 5 1/2 to 6 lbs. His coat was not wiry as a fox terrier but certainly not as silky as a yorkie.  We placed him with friends who had tried to buy him earlier when he was 2 years old and he lived to be 12 years old.

Obviously a mismarked Yorkie is not a yorkie as he does not meet the standard and should never be shown or bred from!!!!

The tri-color yorkie was developed in Germany from Eng. imported stock.

In Peter Coombs book, written article between 1870 and 1880 states that puppies are often born grey and tan, this is also a mismarked dog.  The gene that produces the grey coat dies and the puppy will lose all of its grey hair by a year.  It becomes a hairless dog with only tan hair which carries the living gene to produce this color. It is a blue gene that is a lethal gene.  Again it developed in England where it originated.  It still appears in certain lines, which are always present in the pedigrees of dogs that produce this mismarking.  Another mismarking is a tan colored dog all coat and a brown dog with tan markings, like a Doberman. I have seen ads for (rare?) maroon yorkies.  Obviously a puppy whose lacking the blue gene.  None of these mis-marked dogs should ever be bred from but should be found a loving home after having been neutered.

This may seem harsh but our breed is separated from other breeds by its colors!! Poodles are born in parti-colors but they are not accepted in the Show Ring either.

I  frankly don’t find any reason for continuing these lines that produce throwbacks and do not see why we should allow them, not register.  Of course we did register ‘Trippy’ but it was really for a lark.

I believe the AKC did accept them because they registered other mis-marked dogs of other breeds and because the German K.C. accepted them.

By the way neither Jan or I ever talked to the AKC about our one tri-colored dog.

There was a Yorkie breeder who bred all gold yorkies during the 1930’s but was told by AKC to cease and desist, which was done.

I don’t have a problem writing about our ‘Trippy’ but since the others who bred mis-marked dogs that I know about are all deceased, I don’t believe that I can comment on this matter. I can only hope that like you, they seek the truth and not just rumors! 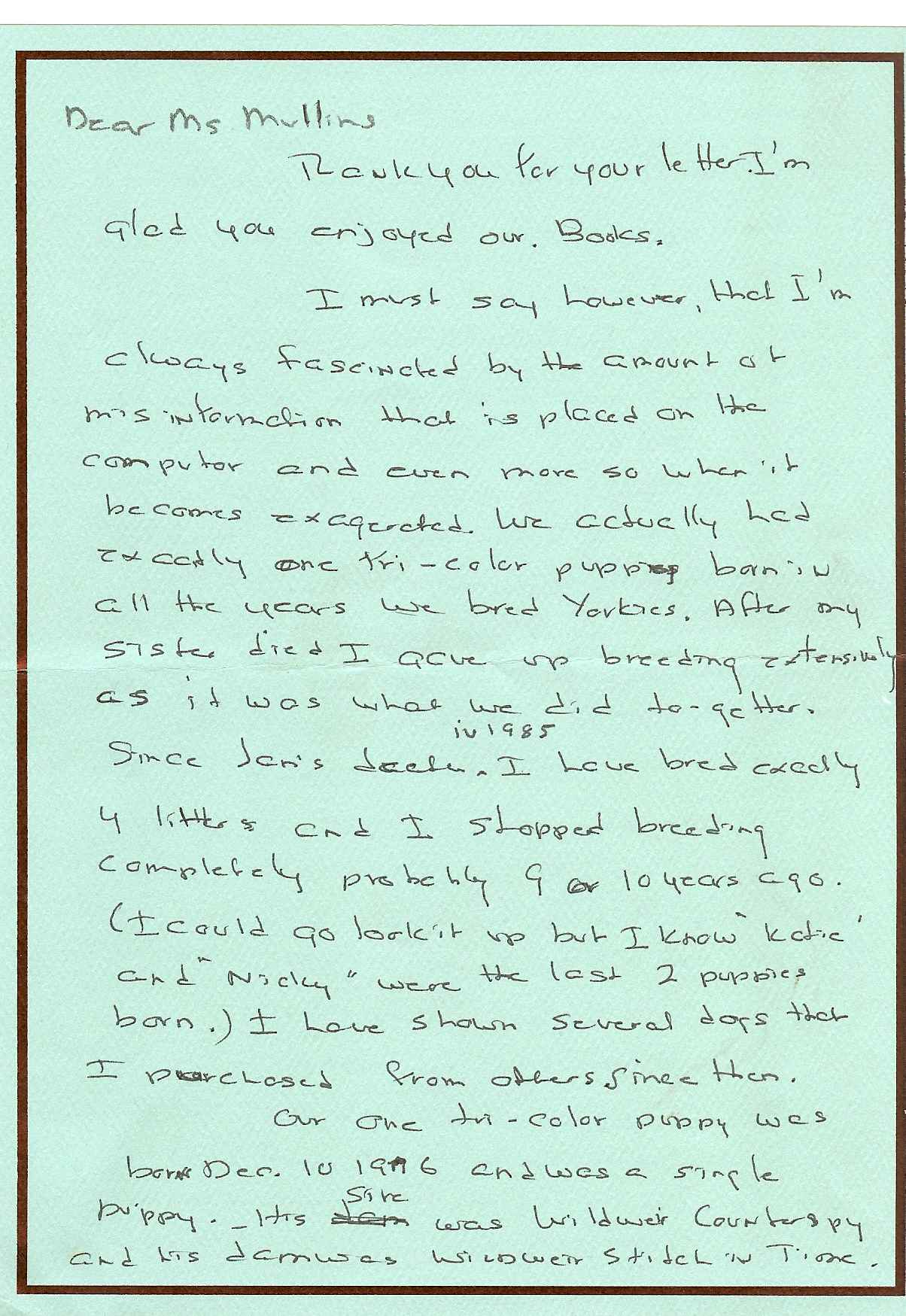 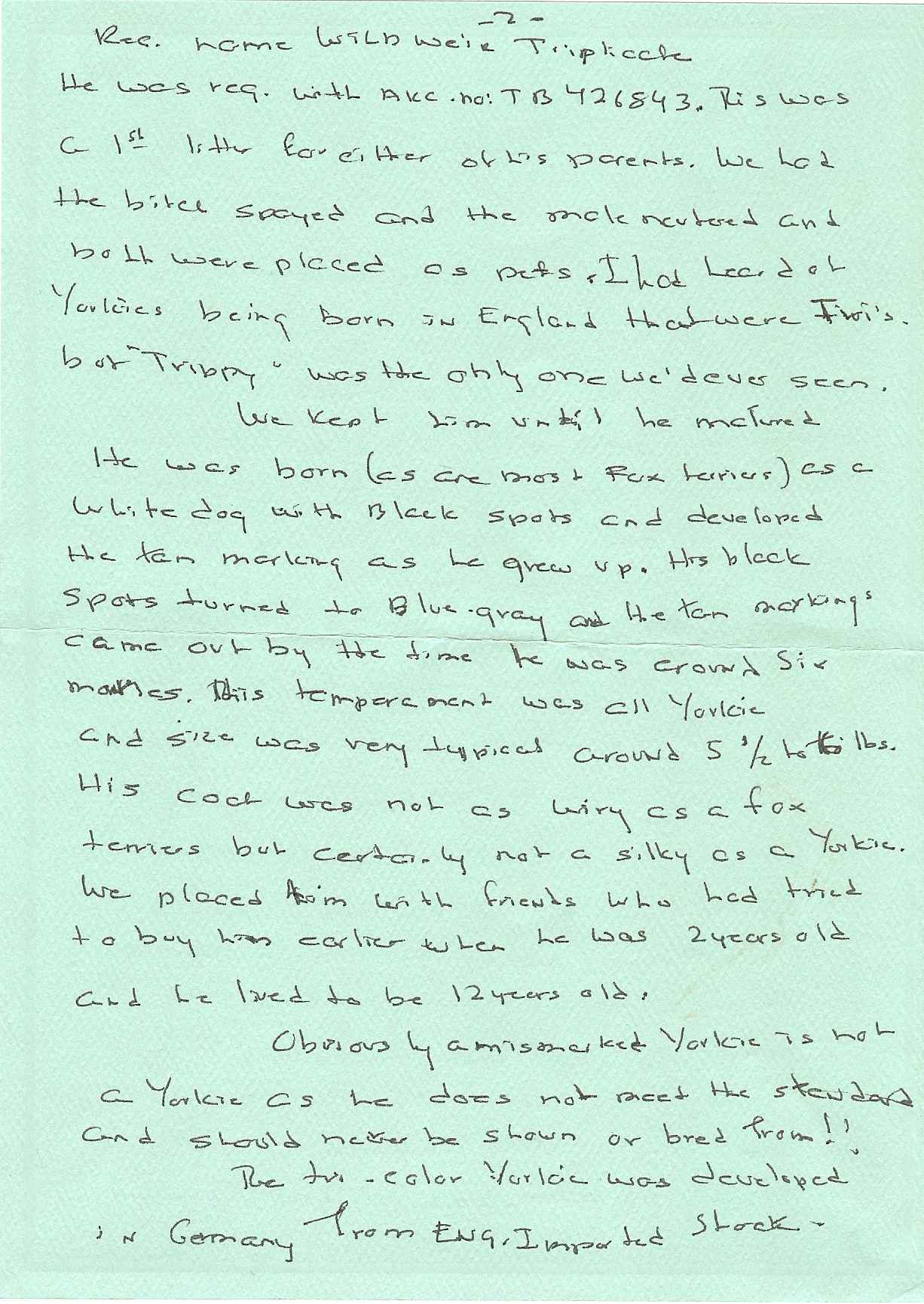 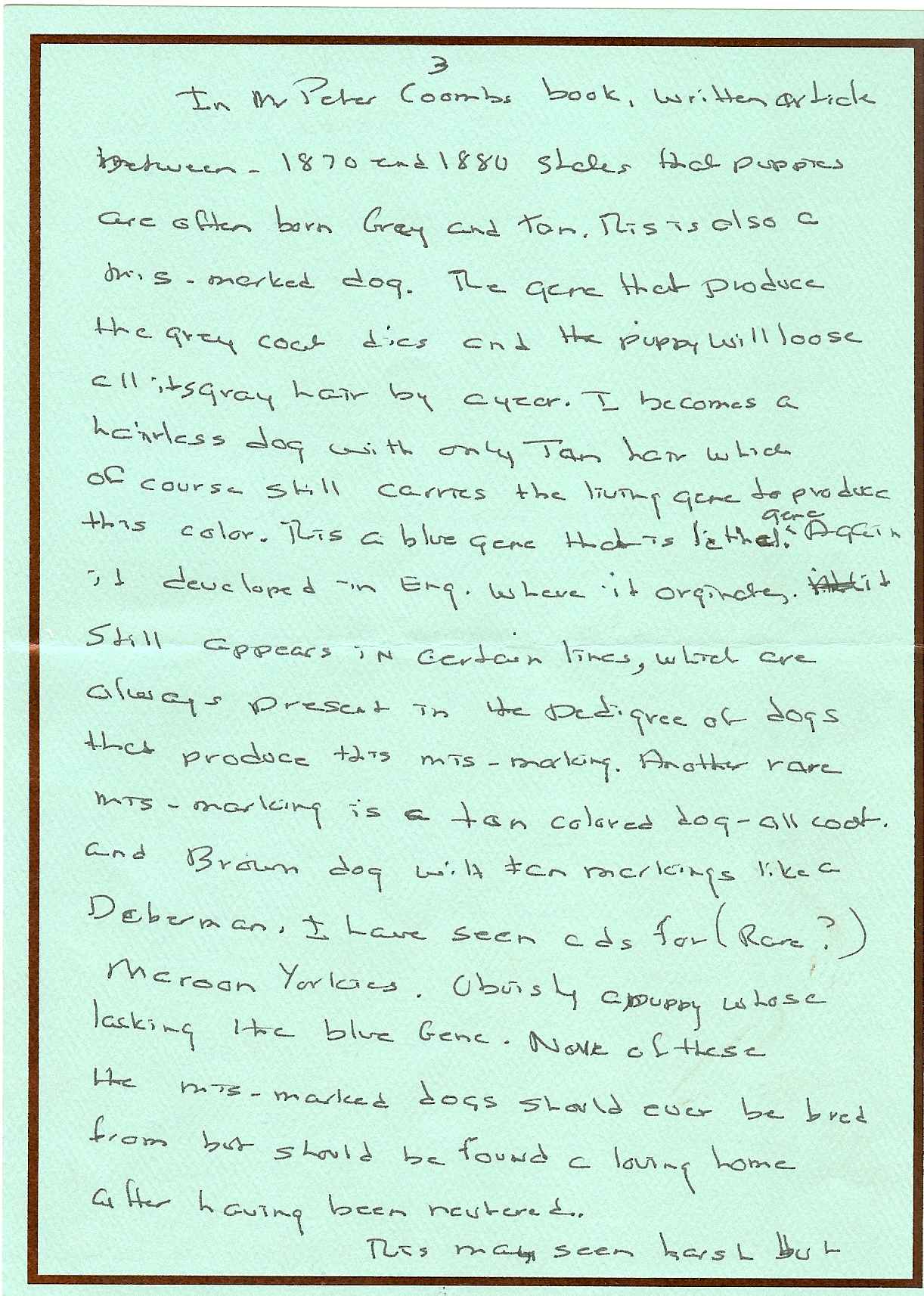 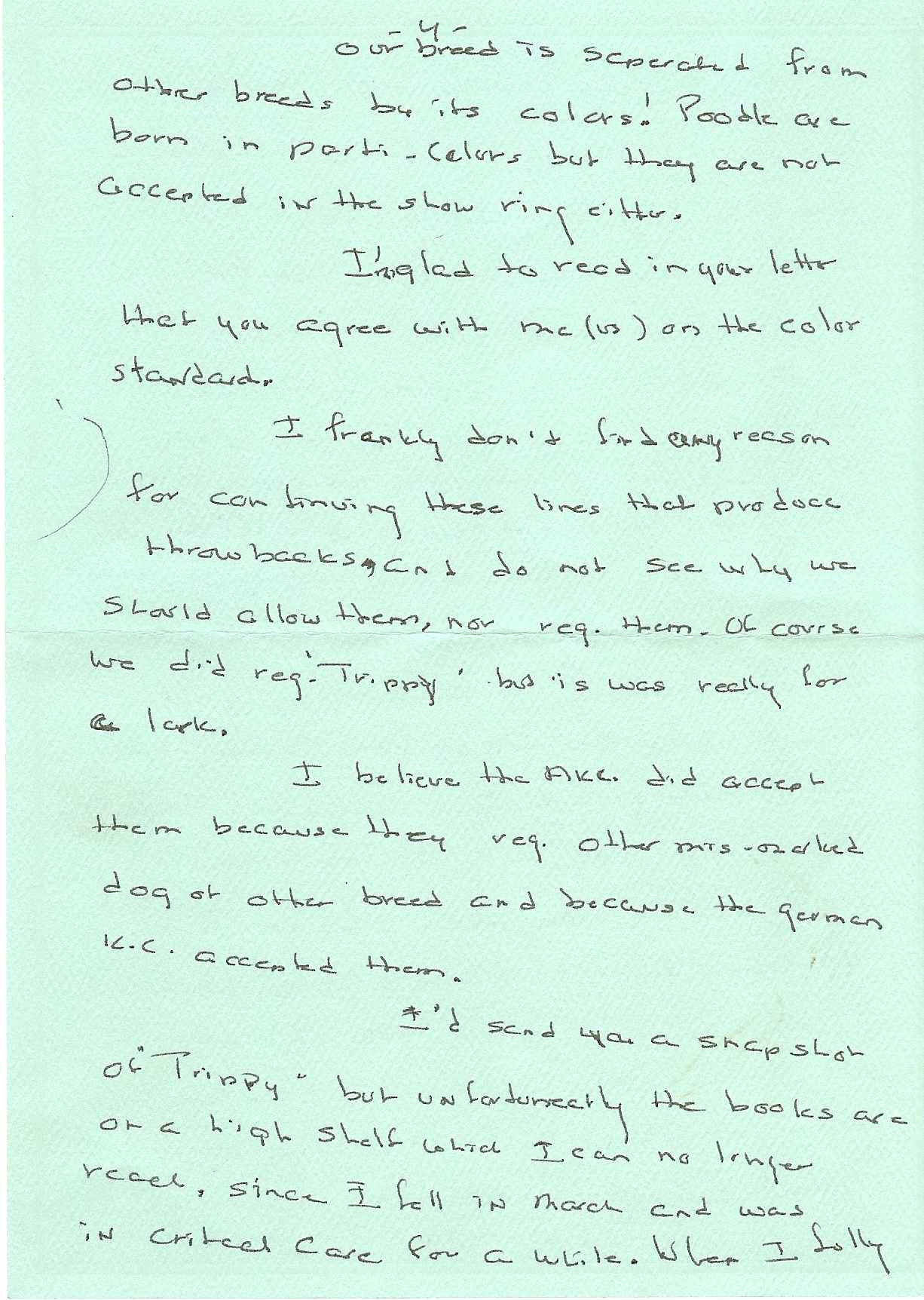 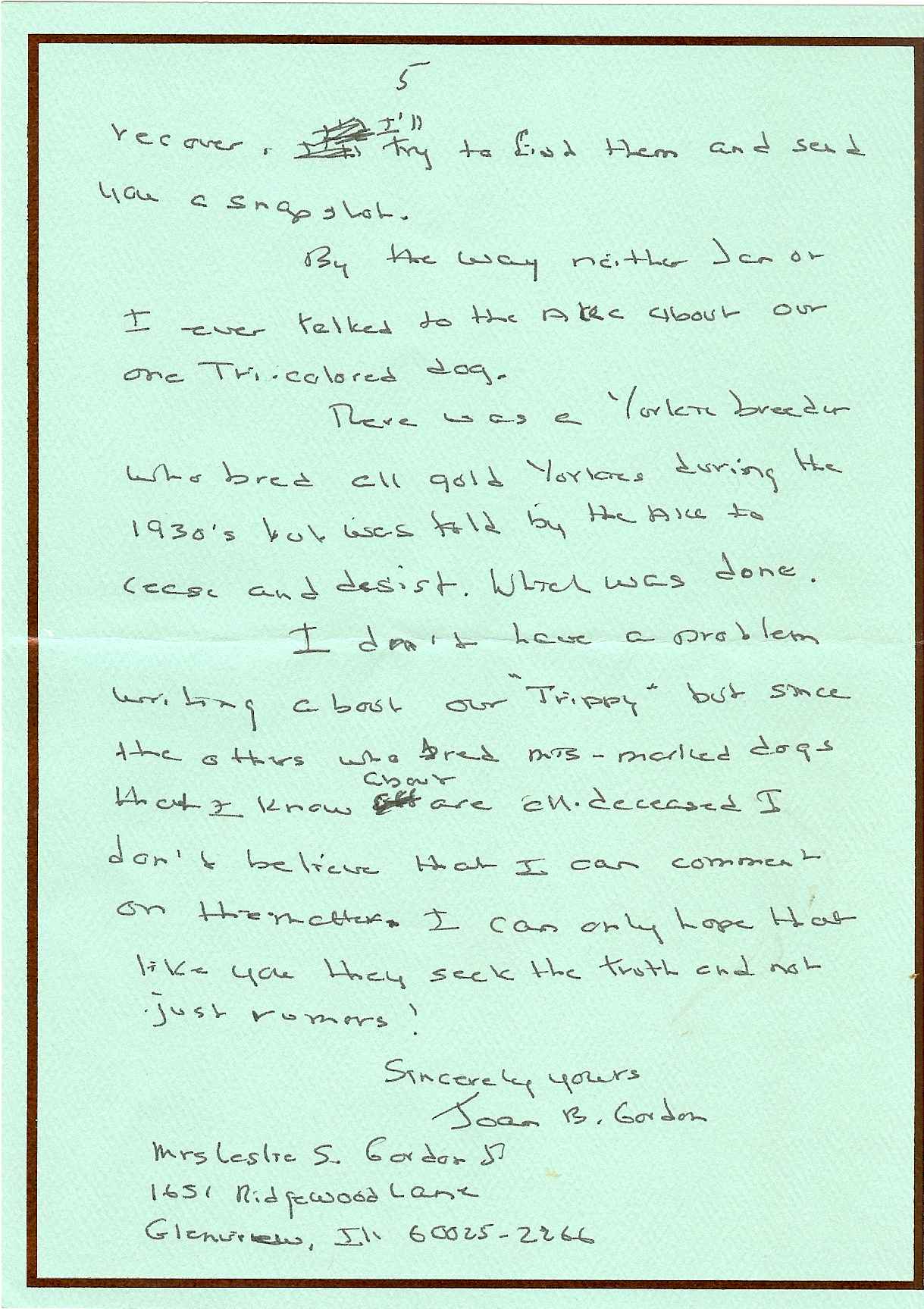 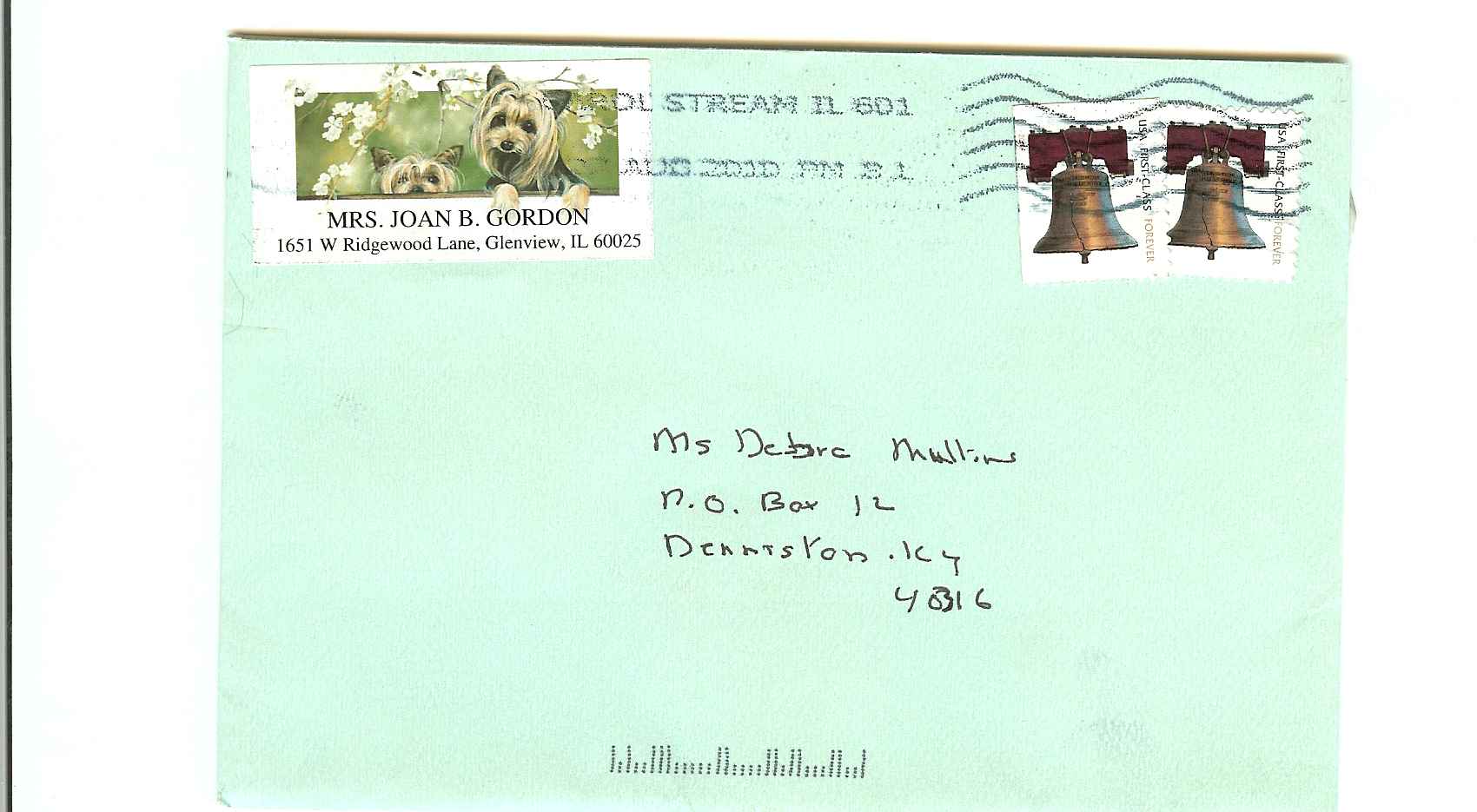