As far back as we can trace the parti color has been in the Yorkshire Terrier.  It is a recessive gene that can be traced back to the 1800's

Now as to  the difference of the two tri-colored dogs, the Biewer Yorkshire a la Pom Pon and the Parti Color Yorkie. I did some  tracing of two lines of tri-colors , Mr Biewers line and  Nikkos line. Both the Nikko's and the Biewer line of Tri color yorkies trace back to Streamglen Shaun. 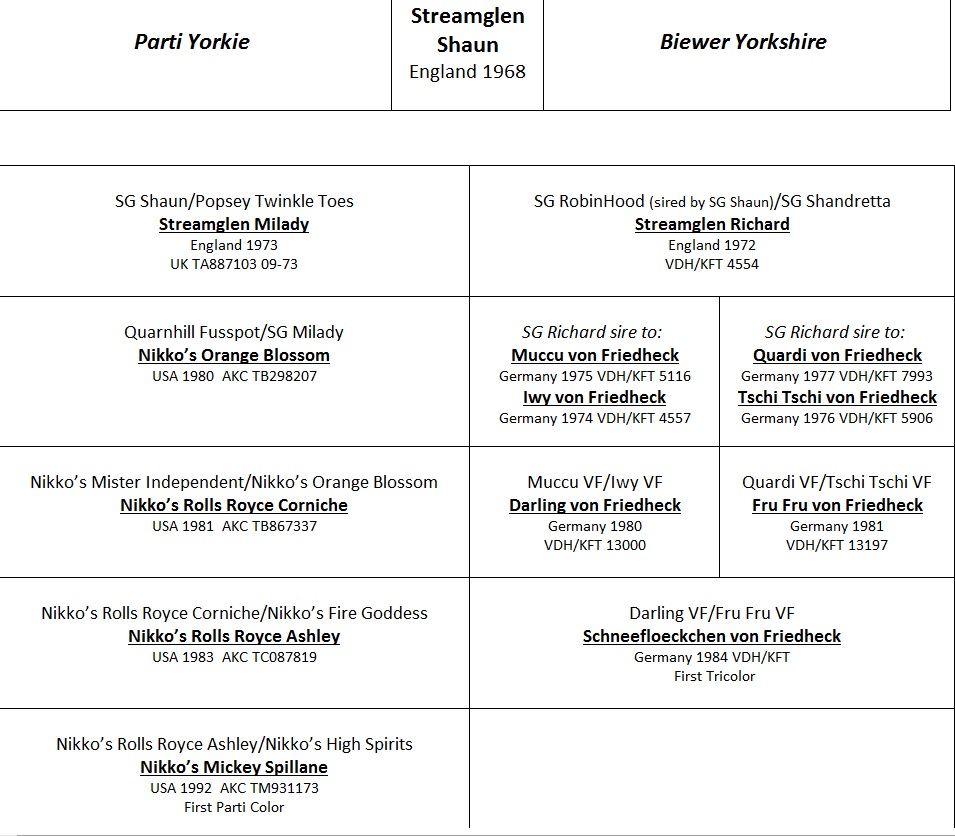 The Biewers started in Germany with Mr. Biewer purchasing a stud dog in 1975 from Streamglen Kennels, Streamglen Richard.   At the  time Streamglen was producing Champion status yorkies and were selling yorkies across the world and the United States.

Mr Biewer started breeding Ch. Streamglen Richard to all his Female Yorkshire Terriers trying to make his own mark by producing Champion quality  yorkies that would come from his kennel. In his quest for champions, he did a lot of line and inbreeding. Then in January of 1984, a tri-colored Yorkshire Terrier was born from 2 of his Champion dogs line bred from Streamglen Richard. Darling and FruFru.

On the other side of the ocean  in the United States Nikko?s Kennels(The Lipmans) were doing the exact same thing, breeding  for Champion Yorkies. Nikkos Kennels purchased a couple of females from Streamglen, One being Streamglen Milady. Nikkos purchased their Champion male(Ch. Quarnhill Fusspot) from Stoneybrook Kennels in 1971 and bred him to Streamglen Milady, the female they obtained from  Streamglen Kennels.  Nikkos then began producing Champion Yorkies and continued to line breed also.   In the 80?s tri- colored Yorkies started showing up in Nikkos kennels also, Gloria couldn?t  bear to put the pups down so she passed them out the back door as pets and told them not to say where they got them(her own words).

Mr. Biewer  registered  his tri colors at first with VDH/KFT but they designated them wrong color not for breeding  so he went in search of a club that would accept them as a variation of the  yorkie. The ACH was the first club to accept them as a variation of the  breed. The dogs were then registered as Biewer Yorkshire A la Pon Pom. They originally had docked tails but Germany passed a law against docking so the tails then remained long.

In the USA, Summit and Crownridge both got tri colored pups from  Nikkos kennels and wanted their tri colored dogs registered with AKC,  as they were born from 2 AKC registered dogs and they wanted the right color to be shown on the papers( Black , white and tan), so in 2000 after 18 months of DNA testing, AKC accepted the tri- colored Yorkshire Terrier. AKC papers state they  are Yorkshire Terrier/Parti color on the papers so the name parti yorkies has stuck with the tri color yorkies in the last few years.

During this time each  country (USA and Germany)went its own way in developing and registries of the tri color, but both are true yorkshire terriers.  How can the Biewer not be a yorkie? It is stated in all the Biewer clubs history that they started from  2 Champion yorkies, If they have tested to not be a purebred yorkie then you do have a mixed dog not a true Biewer that  came from  Mr. Biewers Yorkshire Terriers..

IN the USA's  demand for more Biewers there was possibly some  mixing of breeds done in Germany to supply the demand for the Biewers, The BTCA says they are a mixed breed because they have had DNA  tested on 100 Biewers,  If this is true that they show up as not a Yorkshire Terrier then indeed some mixes were added which makes them not a true Biewer, The true Biewer(In name Only)tri colored yorkie in Germany  came from 2 traditional colored Yorkshire Terriers , How can they be a separate breed? They came from 2 yorkies that carried the gene to produce tri colors. They were not mixes they were JR Champions and they were all Yorkshire Terrier.

In December of 1976 Wildweir Kennels( Joan Gordon and Janet Bennett) had a tri-color puppy born from two traditional color yorkies. She said her sister and her had heard of it  in England but it was the first one they had  gotten. They registered him with AKC as Wildweirs Triplicate "Trippy"  because of his tri-colors.

Joan states that this pup came from Champion lines.

He was registered in AKC as a Black and tan because AKC did not have a color code for tri's in the 1970's.  Most pups born out of standard color were put down, or quietly dispersed of.

This was 8 years before Mr. Biewers Tri- colors were born and Mrs Gordon said that the tricolor was imported into Germany from England.

Joan Gordon of Wildweir Kennels writes that yorkies can be born tri-colored in her book in 1976 (The Complete Yorkshire Terrier) Page 205. This was written years before anyone  ever heard  of what is now called a Biewer.

When you hear people quote that Biewers have a standard and Parti's do not, this is not true. Parti's go by the Yorkshire Terrier Standard except for color. The Biewer clubs also state that their standard has color specific placement and the partis do not. You cannot predict the piebald gene, you cannot predict where the black or the white will be so therefore you cannot be  color specific..  Other than  it must beblack/blue, white and tan etc.  AKC  sets that for the AKC  reg. Parti color yorkies.

A PIEBALD patterned dog has a white BASE coat with colored spots. Piebald means "WHITE SPOTTED" so  you use the other colors on the dog and piebald as the pattern by which it is marked up. A black/tan Piebald would be a dog with a base color of white with colored spots and tan markings on the face, legs and around base of tail.

Piebald is not a breed or a type but a color pattern.

Piebald spotting is a pattern of spots which occur randomly anywhere on the body, including the torso. They are not of consistent size or location therefore. Dogs that have piebald spotting (sp) can have very few colored spots or very many.

The  Parti yorkshire terriers are AKC registered and the Biewers are not.  They are not a RARE breed, they are just a tricolored yorkshire  terrier that  has been popping up thru the years  but because Mr Biewer drew his dogs out of  VDH/KFT  they could not be registered AKC.  In the process of him hunting for an avenue to  breed and show his lovely tri colors he possibly made a grave mistake by registering them with a none FCI registry so he could raise and show them.

Not all Parti colored Yorkies came from the Nikkos line, there are other lines of Parti-colored Yorkshire Terriers.

So it is up to each person to weigh the options of  which you prefer, A Parti color Yorkshire Terrier or a Biewer.  IF you plan on breeding keep in mind that the AKC  Parti color yorkie can be bred to any other AKC  registered yorkie no matter what color. Most  Biewer clubs only believe in breeding Biewer to Biewer,  So to get your pups registered you would have to follow their protocol and the gene pool is  extremely small compared to the yorkshire Terrier Gene pool.

I would be glad to answer any questions anyone has on these dogs, My email and phone number is on  my contact page. Feel free to contact me anytime even if you just want to talk yorkie or say HI.