The definition of Parti -is per AKC-   Parti-color Two or more definite, well-broken colors, one of which must be white. For example, Black Parti-color would be black and white.  If you  hear the term Parti Yorkie, they are talking about the color of the yorkie.  The Parti yorkie is not a separate breed, it is a yorkshire terrier. The  Parti stuck in front of the name to describe its color.  AKC registers them only as a yorkshire terrier and the color on the papers will say for example(black/blue, white and tan/gold Parti color) Where the regular yorkies colors are black/blue and tan/gold. No white.

The Nikko's line is the line of Parti color yorkies most people are familiar with here in the  USA.

Nikko's Rolls Royce Corniche was a top show contender in  1983 and 1984, he was out of Nikkos Orange Blossom and CH. Nikko's Mister Independence.   From Corniche came  Nikkos Rolls Royce, Ashley,  (Born 6/19/1982) From  Ashley, Came Nikko's Mickey Spillane ( Parti colored) ( Born 5/3/1992) and   Nikko's  Silk and Sale   (Born 9/9/1991)  When these 2 were bred together my records show that  3  puppies were born on 10/15/1997.  These pups were Nikko's Great Expectaitons (PartiColor)  Nikko's April in Paris(parti-color) and Nikko's Golden Charm II(Black and tan w/white Markings).  Nikko's Mickey Spillane was a parti, but as I said, his AKC papers state blue and tan because AKC did not Acknowledge the parti color at that time.

The Tri- color had been showing up in litters from Ashley since 1984  and Nikkos Kennel had been quietly placing them in pet homes and asking people not to say where they got them.

Crownridge  and Summit had obtained Parti colored puppies from Nikkos kennels and wanted them AKC registered with their true parti-colors . So in 1999 they convinced Nikkos Kennel to  go to AKC and get them registered  as yorkshire terriers parti color.

This turned out to be a very lengthy and costly process to Mrs. Lipman,(Nikko's Kennels) as AKC shut down her kennel in 1999 for 18 months to conduct DNA studies of 42 litters sires and dams. She was not allowed to breed or sell  or conduct any business during this time.

During this study AKC also spoke to several other breeders about tri colored pups born in other bloodlines.

Many highly respected breeders admitted they occasionally had these tri colored pups born.

AKC went back as far as they could with the living dogs. They DNA'd about 42 litters. They also talked to a lot of the "old" breeders and they told them they had always been in the lines but were disposed of.

In June of 2000.  The DNA studies of Nikko?s Kennel was completed to the satisfaction of AKC.

AKC deciding that after a study of the Yorkshire History and the DNA of the dogs involved in the study they were satisfied that the color can be produced in otherwise normal litters of Yorkshire Terriers.

There are several lines of Tri color Yorkies, but Nikkos Line has been the most talked about and prominent because they were the ones who had all the testing done. Tri-colors have shown up in  Wildweir, Hylan, Durrer, Parquin and Kokopelli to name a few. 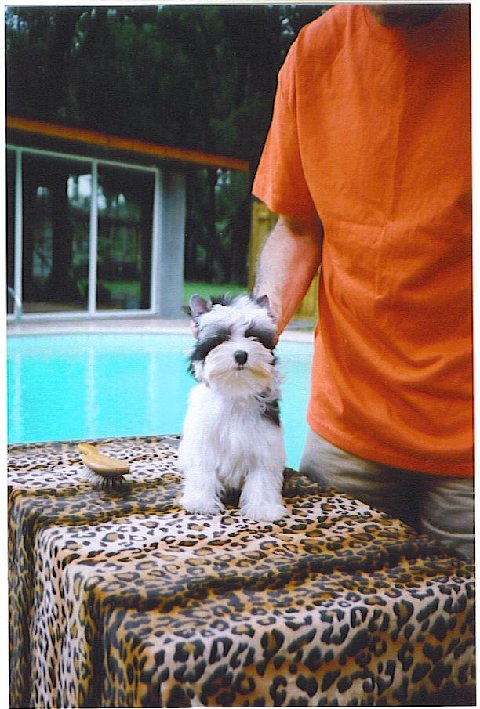 On  December 10, 1976 Joan Gordon and Janet Bennett/ Wildweir Kennels had a Tri- colored yorkie born,  At that time they had heard of tri's being born in England but had never seen one. They AKC  registered the pup and named him Wildweirs Triplicate"Trippy" after his tri colors.  He came  from a long line  of  Wildweir Champions and they were indeed shocked to see that the tri could actually be produced from  2 standard colored yorkies with no history  of tri  colors in the background. Joan stated they had heard of the tri colors in England but Trippy was the first they had  ever saw in person. Trippy was around 5 lbs and was all yorkie in temperament. They kept him until he was 2 yrs old and then placed him with friends where he lived to  12 yrs old.

The letter I received from Joan  Gordon where  she talks about  the tri color that  was born into their kennel and of the various colors that were born all thru the years.

Book References to  other colors of Yorkshire Terriers:

In 1976 Joan Gordon and Janet Bennett published a book, The Complete Yorkshire Terrier.

"It is not unusual to find small white marks on one or more toes or a fine white line in the lower fore jaw. These will not be visible as an adult. A large amount of white marks on the chest, paws, jaws, or skull, places a yorkie into a tri-color classification and it is very wise to guard against this possibility. Yorkshire terrier puppies can be born of colors that automatically deprive them of the necessary qualities to become the proper colors of the breed. They can be born all black: all tan: tan with black points; tri-color: black, white, and tan; all blue; bluish grey with tan points; and so remain or change to another shade of their newly born colors. These mismarked Yorkie puppies are not the result of the mis-alliances or throwbacks but are rather the net product of incorrectly inherited genes which have failed to activate the pigment glandular system to providing what they require to be in accord with the Yorkshire terrier standard. Puppies incorrectly colored or marked should not be sold as rare, they should not be registered as Yorkshire terriers, but should simply be found a loving home If one cannot bring oneself to having them put down." 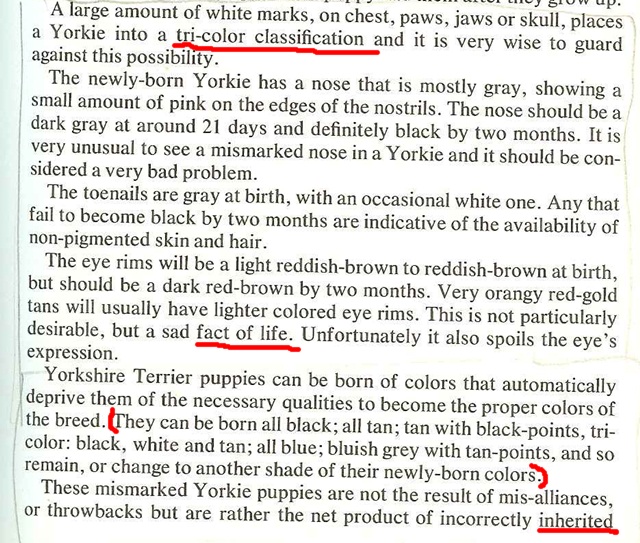 The breed most connected to the Yorkshire is the Broken-Haired Scotch, which had distinct black, white and tan colouring. Local hooligan dogs like the Black and Tan English terrier, dodgy-looking Maltese imports, and the Waterside Terrier (a small, long haired little ratter) were also chucked into the meld.   (Article  here)

In an 1895 book entitled The Dog by Stonehenge, he states about the Broken Haired Terriers" Sometimes the Broken Haired dog is  White,  more or less marked with blue or some other color, but the less  the better.

In 1904, Mrs Leslie Williams published the book, ( A Manual of Toy Dog How to Breed, Rear and Feed Them).

In the book she writes ? A Yorkie must have the nourishment of meat. Withal, it is a merry little soul and if its coat can be to some extent sacrificed, a good companion, fond of outdoor life, very barky and lively and tolerably affectionate: but a really lovely show yorkie is not a being for everyday. The breed does not suffer much from ?distemper? and strange to say in spite of generations of coddling and fussing, and breeding for smallness and coat is a decidedly healthy one.The white Yorkshires a new variety some folk have tried to push is, I think in no way especially desirable---The Maltese can do all that is necessary in that line: while the attempt to make ?silver? Yorkshires popular, too, simply means that the bad colored dogs without any tan (paleness of tan is the stumbling-block in many Yorkshire?s career) are classed by themselves and offered prizes.?

An excerpt from an article written in The Yorky Club Magazine 2008 on Colors and Texture by Hugo Ibanez, he states:

You must understand why we have so much trouble and tribulations with color and texture as well as other elements of type. As I indicated before, I was coming back to touch a bit of history. Learning a bit about Yorkie ancestors will give you a better understanding of our breed and the Yorkie founding fathers, the consequences and difficulties with which we are confronted today.
In 1845, one of them was described ?resembling a Scotch (not Scottish) terrier, weight about 8 or 9 lbs., with good terrier head and eye but with a long body. The legs and muzzle only were tanned and hair on the body would be about 3 or 4 inches.? His mate was described as ?a drop-eared Sky under 12 lbs with plenty of coat of blue shade but destitute of tan on any part of the body.?
The third dog to play his part in the breed?s foundation was ?a bitch, an old English Terrier with tanned head, ears, legs and sort of grizzle back.? Most of these English Terriers also had white markings.
These genes from these dogs are the beginning of our breed. It seems that after 163 years, those initial genes would have disappeared or have been diluted; apparently, they did no disappear, they just laid dormant, in sleep mode.
Some canine experts believe our purebred dogs are locked in a genetic trap due to the evolutionary and hereditary process. What does it all mean? It means that after so many years it is difficult to eliminate influences of breeds used in early foundation stock. Why? Well, it could be argued that at the beginning all were somewhat inbred, as any given breed would have a relatively small member of founding sire.
What are the consequences?
Well, as you can see we are attempting to breed the perfect dog from imperfect ancestors. 163 years seem legendary, but, genetically, Yorkies are newbies (babies)
As you can see our ancestors were ?tutti frutti? which makes our breeding more complicated. Nevertheless, considering all the odds, we have succeeded in most of the elements of type. All we have to do to reassure our success just take a pick of pictures of Yorkies appearing in books and magazines from the last century, it would seem ? to our reality now ? that many were just pets.
No one knows better than you that as much we have progressed, we can not get complacent, still the hill that we must climb is too steep.